I’m not quite sure if I have always loved to read, but I have certainly grown to really love it over the years. I am sure there was a time in my life when I hated it and felt as though being forced to read for school was somewhat similar to a punishment.

Now though? I love it. Sometimes, when I really get into a good book I find myself reading while I am cooking, staying up later than I should just to finish a chapter, only to continue onto the next chapter, then the next. I find it’s a nice way to unwind and just not think. Those are the types of books I like to read-ones that don’t require much thought. I spend all day long thinking and thinking and thinking so it’s nice to just not.


The other day I noticed that I haven’t been reading lately and it kind of bothered me! Why haven’t I been? Where’s my Kindle?! I guess the busy-ness of the holidays kind of took over! If you read my post on Monday about my 2017 goals you saw I am making this year MY year. I am thinking making more time for reading is a good way to take care of ME.

I have read some of these, and the ones I haven’t read yet have been on my “to read” list for quite some time. I will say Elin Hilderbrand and Nicholas Sparks are two of my favorite authors (really-I set Nicholas Sparks website to my homepage in college…that’s how much I love him-HA!).

Here are my current picks/recommendations. I included a little description of them so you can get an idea of their plot! I would LOVE to hear your book recommendations! 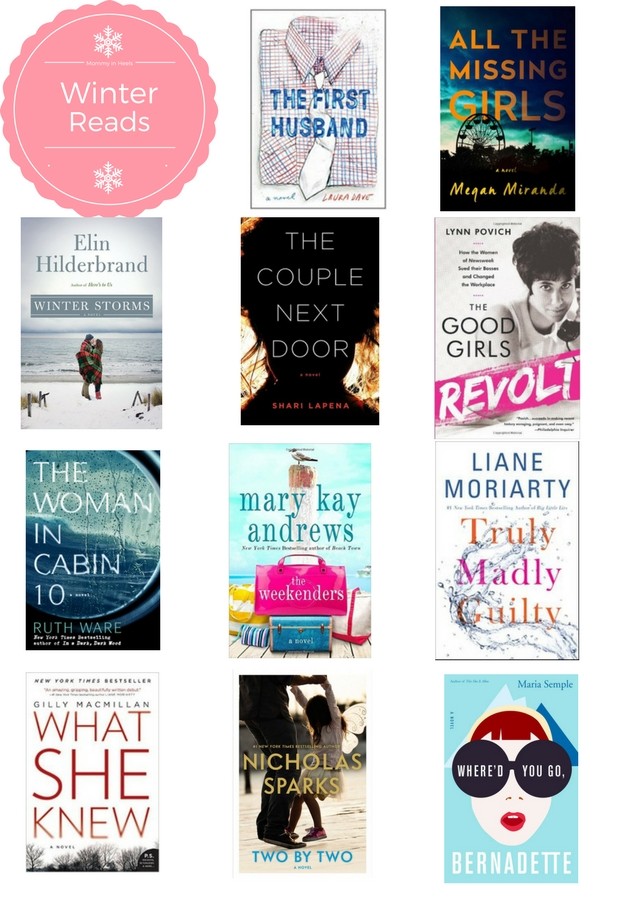 The First Husband: Travel writer Annie Adams (who just had her column syndicated) thinks she has it all. She lives with her longtime film director boyfriend Nick-she has it all. Then Nick moves out! Fast forward three months, and Annie is married to a guy named Griffin who is a down-to-earth chef (with a restaurant in the Berkshires). Nick asks for a second chance, and Annie is torn between her husband and Nick!


All the Missing Girls:  I asked my snapchat/instastory followers to recommend any books I could add to this list, and this was one of them. It sounds so good! This story is about two girls who went missing, ten years apart. Except the story is told in reverse. The main character Nicolette goes back to her hometown ten years after her best friend Corinne went missing. While she’s at home her old boyfriend’s girlfriend goes missing. She tries to find the truth about Corinne’s disappearance ten years earlier while uncovering some truths about her friends!


Winter Storms: Elin Hilderbrand his hands down one of my favorite authors. I have always wanted to visit Nantucket, but her books make me want to visit even more. All of Elin’s books take place on Nantucket and usually during the summer months. Over the last two years though she has released a winter novel. Winter Storms is the last in the trilogy of the Quinn family. It is such an easy read and will have you longing for Nantucket. If you haven’t read the first two in the trilogy, I of course recommend doing so-  Winter Street is the first, Winter Stroll the second.


The Couple Next Door: If you liked Gone Girl, or The Girl on the Train, then you will definitely like this. Anne and Marco Conti look like they have it all- happy together, a wonderful home, and their beautiful baby named Cora. One night when they are at a dinner party next door, and a terrible crime is committed. Suspicion immediately arises but the truth is much more complicated. In the midst of all of this, Anne and Marco discover that they are both keeping secrets.


The Good Girls Revolt: I cannot say enough good things about this! I first became interested in it when I watched the (short lived-boooo) series on Amazon. I because obsessed. Like spent hours googling anything and everything I could on the real powerhouses behind the story. If you aren’t aware, Good Girls Revolt is about the women of Newsweek sued their bosses and basically paved the way for working women in the future. When this occurred, the highest women would get at a publication like Newsweek was a researcher, rarely a reporter. Lynn Povich, the author, was one of the ringleaders and accounts how this lawsuit changed and hasn’t changed the workplace.


The Woman in Cabin 10: This is another book for Gone Girl lovers. Lo Blacklock writes for a travel magazine and has just been given an assignment- she gets to attend a luxury cruise that only has a handful of cabins. While on this cruise, she is certain she sees someone get thrown overboard but everyone is accounted for and the cruise goes on as if nothing ever happened…


The Weekenders: This was such a great book. While this was released last year, I think it’s a great, easy, read especially this time of year when it’s bone chilling cold outside! Not only do I recommend this book but I do recommend all of Mary Kay Andrews’ books- they are so good. She is definitely one of my go-to authors! In this novel, Riley Griggs is waiting for her husband at the ferry to head to the island of Belle Isle, North Carolina for the summer. She ends up being served with divorce papers, and finds that her husband is missing. While she turns to her friends for help, she finds that they all have their own, murderous, secrets.


Truly Madly Guilty: I was a fan of Big Little Lies and The Husband’s Secret so I knew this would be a good one. I still think The Husband’s Secret is my favorite one, but this one is still so good! In this novel, Sam and Clementine decide to attend a barbecue with their friend Erika. Fast forward two months, and Sam and Clementine can’t stop thinking about what would have happened if they hadn’t gone to that barbecue.


What She Knew:  I haven’t read this one yet-this was another recommendation! In What She Knew, Rachel is at the park when her son Ben vanishes. The media focuses their attention on her, and of course her newly married sister-her husband happens to be Rachel’s ex-husband. As Rachel tries to uncover the truth she starts to realize that danger could be closer to home than she realizes and not in the strangers she originally thought.


Two by Two: I don’t even know where to begin with Nicholas Sparks! I love all of his novels and know that I will most likely cry at one point or another! Something about this writing just draws you in. I love that they are easy reads, too. I haven’t read this one yet, but it is on my list-without a doubt! Russel Green is a successful advertising executive with a great wife and an adorable six year old daughter. But in a matter of months, he finds himself without a job or a wife and is caring for his young daughter-all if this is his new reality…


Where’d You Go Bernadette: I read this a while ago-it’s definitely not new, but this is worth revisiting. I really enjoyed this-kept my attention and was a relaxing, easy read! Bernadette lives in Seattle with her 15 year old daughter bee and her Microsoft guru husband. She has a seemingly good life. And then she vanishes. Her daughter does everything she can to find her mother from compiling emails to secret correspondence, to official documents…